I thought I might gather and share with you images inspiring my feelings for the sea, boats and ships.  There are a few related toy series waiting in the wings. Last year I drew up the basic designs while the connections were fresh.  The impressions returned today while watching the mysterious half presence of the ships anchored in the bay, a salty easterly cooling the skin - humidity over 70%. 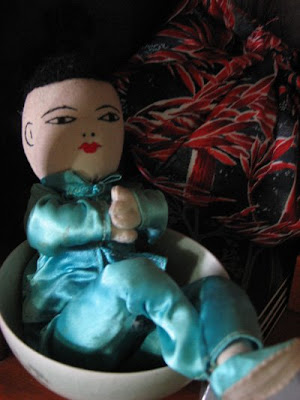 2009 is the year of the Ox (Bull or Buffalo).  I have of late been receiving a few letters from Mercury regarding the Ox and he tells me of his bravery - a pure white bull is the mount of the Hindu deity Shiva and the bull was always a much prized sacrifice to the gods and heroes of ancient Greece. Truly the patient strength of endurance exhibited by the noble ox is inspiring.

But there are some little secret things about the ox too.......

They say he is naive in love but that's because his heart is so big.  See him there amongst the flowing emerald grasses, he is smiling, courting his mate, they play through the grass like sleek, black fish through the waves.  Together their happiness radiates warmth to the four quarters of the earth.  What's that up there?  He spies a special coloured cloth that hangs precariously, perhaps on a cliff, perhaps in the heavens itself.  Why not bring it back for his Beloved?  Swiftly see him speed to it with the rash wings of a noble spirit!  Falling now, falling....his small black body has lost all purchase upon the earth...but the gods themselves are moved and with a great pulsation of blood through the cool Spirit of heaven, the little black body is now cupped in the hands of the Great One...blessed and secure!

Posted by Florence Forrest at 11:20 am 2 comments:

The Cup of the Sea 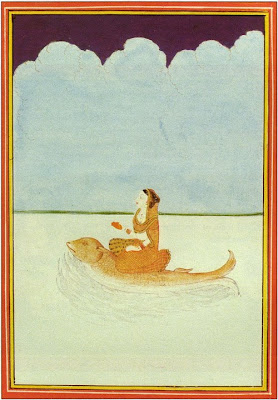 *
The Cup of the Sea
*
I found a cup in the sea one day,
I found a cup in the sea.
On the sandy bottom I saw the cup,
On the sandy bottom it lay.
*
Dare I pick it up?
This mysterious cup of the sea.
Dare I take it away with me?
The beautiful cup from the sea.
*
White and blue and yellow it was,
White and blue you see.
And on it wild flowers were wot to bloom,
Like the sun at noon for me.
*
I found a beautiful cup one day,
I found the beautiful Cup of the Sea.
I found the Cup of my Heart that day,
'Tis a Wonder for you and to me.
****
This is a song I wrote today while I sat by the bay here at Sandgate in the company of grey skies and seagulls. It came out so quickly and I must say that I like it very much and the more so because it is a true story.
The beautiful Indian miniature painting is of Yumuna, daughter of Surya, God of the Sun, and sister of Yama, Ruler of the Kingdom of the Dead. She personifies the River Yamuna, a tributary of the Ganges. (click on the image for a better look) The Hindu Pantheon: An Introduction, Illustrated with 19th Century Indian Miniatures from the St. Petersburg Collection, E. Tyomkin and M. Vorobyova-Desyatovskaya, Garnet Publishing, UK, 1994.
Posted by Florence Forrest at 5:38 pm 5 comments: 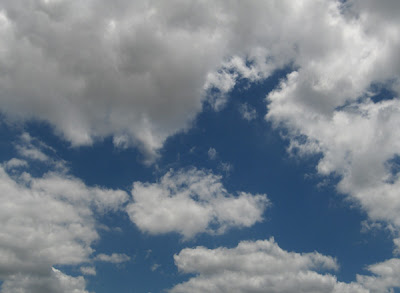 Like these drifting summer clouds I'm drifting into the new year.  In 2009 I want to focus on creative development and try to maintain a good work/life balance (as they say these days)...I might even get around saying hello to my long time favourite blog friends.... 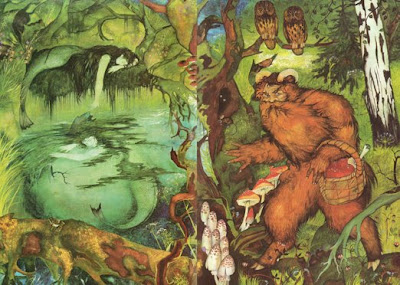 Last night before going to bed I was reading one of my favourite books of folk tales - Heroes, Monsters and Other Worlds from Russian Mythology by Elizabeth Warner.  It is accompanied by wonderous illustrations by Alexander Koshkin.  The large double page illustration above shows a few Rusalkas, mermaid like water creatures, sporting alluringly on the left and a burly, red Leshii with dexterous hands holding a basket of bright magic mushrooms on the right. (click the image for a better look.)

It was a painting that struck me for one reason or another and without giving away my secrets I thought I would share its beauty with you to start off what I hope will be a very happy new year.