May Your Holidays be Bright 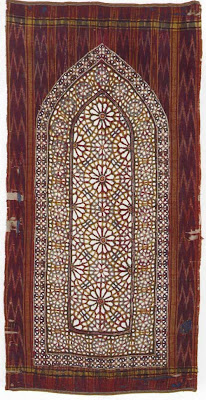 Wishing all friends of WindBagandThunder a happy and safe holiday season.

I hope you've enjoyed the journey so far, I know I have. It's been wonderful meeting you all. 2007 holds lots of exciting new projects among which will be the launch of my website Flying Star Toys.

I'll be taking a short break over Christmas but I'll be back again to kick off the start of the new year.

Until then, take care with all my love, Before I continue on my own thought path, I'd like to share this book review highlighted in the latest designboom newsletter of the new book "By Hand: the use of craft in contemporary art" by Shu Hung and Joseph Magliaro, Princeton Architectural, 2006, ISBN: 1568986106. 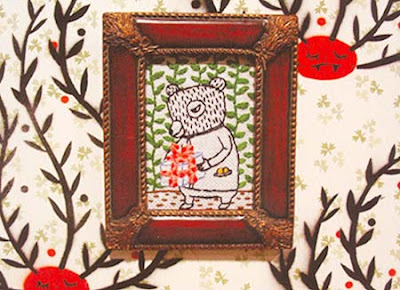 Here's a sample of the review:

"age-old techniques, often passed down from one generation to another. with focus on detail.it takes a long time to make something.in these laborious art works the process becomes important.to ‘craft’, meaning to ‘care’, is restored to its original sense.the process of fabrication as gestures of sincerity."

Unfortunately, it wont be available on Amazon until after Christmas, but worth adding to the wishlist.

Imperfection by design and Arachne's Legacy 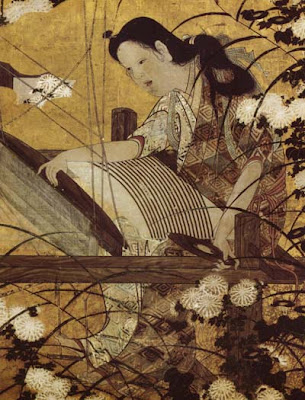 In my last post Why I like Folk Art - part 1 there was some discussion in the comments on the use of imperfection in craft by design and not by fault. Jude introduced us to the Christian folk custom of using imperfection in work as a form of devotion; that perfection belongs only to God - "Only God can make a tree." I also mentioned Chinese art theory introducing the notion of the circulation of qi (I'll be doing a whole post on this soon). But today, as I was ferrying miniature Lilli&Tom to Mt Ommaney library for their December sojourn, I remembered the Ancient Greek myth of Arachne.

Arachne was a young girl from the town of Lydia, her weaving skills were of such quality that her work was renowned throughout the country and beyond. Soon words praising her skill reached the ears of Athena herself, the Goddess who invented the spindle. The Goddess, affronted by this praise for a mere mortal, came down from Olympus and challenged Arachne to a contest in weaving skill.

Arachne wove a tapestry of incredible depth of colour, with details showing the troubled and scandalous lives of the Gods. The people marvelled at the work, the like of which had never been seen before. However, Athena was not to be out done, and standing her giant spindle on a mountain top she took the golden clouds of morning onto her staff, then she wove into the cloth the silver of starlight and brought forth scenes of the world's creation. The people fell down and worshiped her. Arachne in despair killed herself but Athena took pity on her and instead transformed her into a spider - a weaver of considerable skill but of humble disposition. 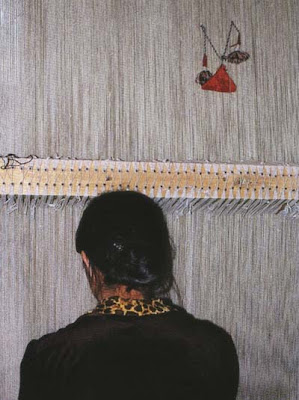 It can be noticed from the myth that high praise has attracted the "evil eye" in this case from the powerful Goddess Athena whose reputation Arachne's perfection had threatened. Shelia Paine, in her book "Amulets: A Secret World of Powers, Charms and Magic"

, records that in many cultures both ancient and extant, the evil eye is alerted by perfection and words of praise, placing the subject in danger of misfortune (due most likely to the machinations of envy and jealousy). To avert this danger, charms are used during the process of weaving and elements are made imperfect. The picture above illustrates a triangle charm use for this very purpose. The devise of imperfection in the crafts as magical protection is quite wide spread.

Image 1: Detail from the two fold screen "Weavers and Dyers". From the first half of the 17th century, Edo period. Pigment on gold leaf over paper. height 151.3 cm x width 170.9 cm. From the collection of MOA Museum of Art, Japan. 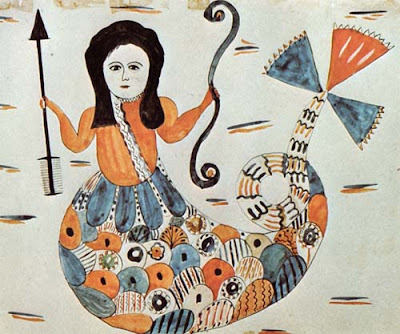 "(folk art)...owe their timeless appeal in part to their simplicity and familiarity and in part to the manner in which they were interpreted. The accomplished folk artist, often far removed from sophisticated centres of culture, captured intentionally or not the intrinsic beauty of everyday objects and freely adapted traditional symbols. 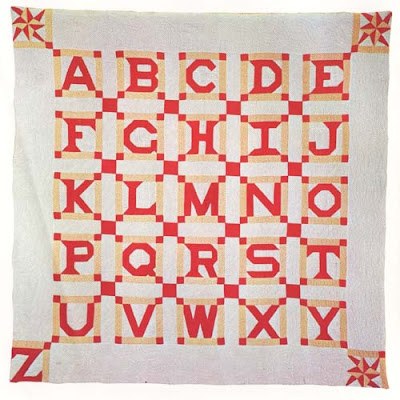 "In the personal touches - the oddly placed Z on the alphabet quilt, a mermaid holding a bow and arrow - we are reminded of the endless resoursefulness of the individual spirit in imparting to ordinary images an extraordinary vitality."