The Chariot - the passions 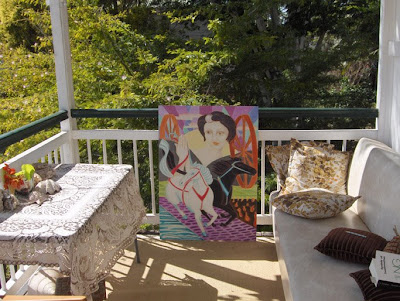 About 10 years ago I revived my artistic practise. I chose oil pastels as my media, they are very like the oil based crayons we used as children. I've been interested in exploring how far I could take the tools we were offered as children - crayons (oil pastels), set triangles and circles, origami and toys for example. With my oil pastel work I developed a style of simple line drawing coloured using a method of rubbing back the applied colour to produce a staining on the board, building up layers of very thin coats of colour. Do your remember shading the coastlines on maps rubbing the pencil scraping in with a small piece of torn paper? My method is a bit like that only with a thin piece of dish cloth wound around my finger like a thick band-aid. This work culminated in a series of large symbolic paintings which are my version of the major Arcana of the Tarot. I completed about 10 paintings and still have the cartoons for a few more. However, as I became more involved in the Brisbane art scene my interest moved to my work with toys so I put these large paintings away, realising that their style was not "marketable" - this was in 2004. 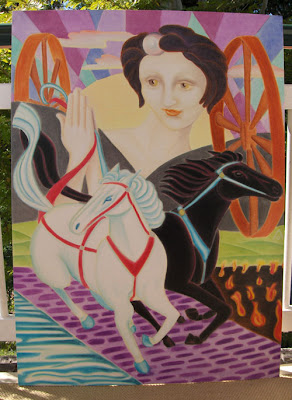 Four years later, I've journeyed further into the realm of the Spirit and have become more adept in the symbolic language the human psyche uses to communicate its inner reality. I'm thankful for these paintings and their lack of marketability, it has kept them safe for me until the time I would need them - when I could handle and differentiate parts of myself symbolically. Now I see them as more than a pure hope or forecast but instructive of living principles in my own voice - my individual potential.

Jung writes that one can only become that which one has the potential to be.

The painting above is called The Chariot. (click the picture for a larger image)

looking into the studio - afternoon light 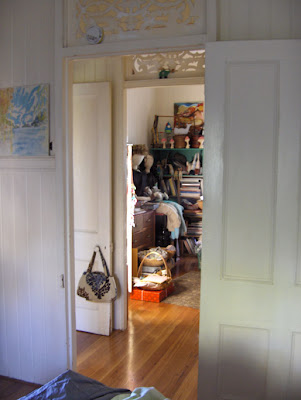 Labels: Behind the Scenes, Life

What a wonderful surprise to discover my Ishmael's Whales on the front of the flyer for the KickArts shop. KickArts have been very support of my work and those of my other artist friends such as Liana Kabel (the Drip Drop Earrings right hand corner) and Kylie Johnson ( ceramic clouds in the centre), Rebecca Ward (jewellery) and Shannon Garson (porcelain). The team at KickArts work very hard to bring together an exciting range of contemporary exhibitions and work. If you're ever in Cairns I highly recommend a visit. 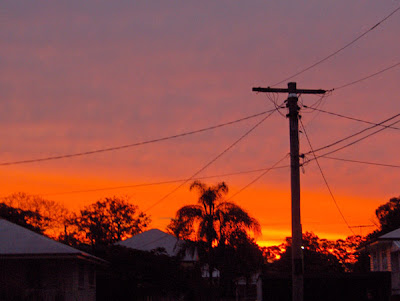 A cold, drab day that crept across the hours. Then suddenly the sun condensed its power into a splendour of pink and gold before night's mask wrapped our eyes. 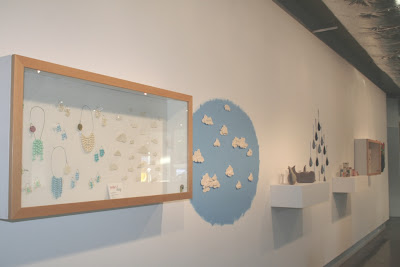 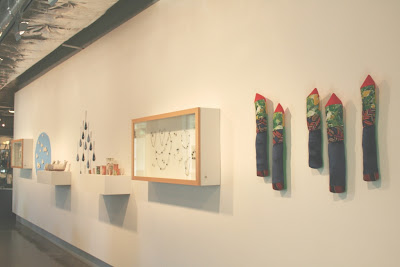 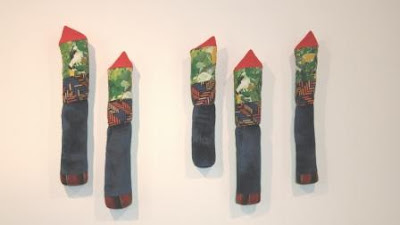 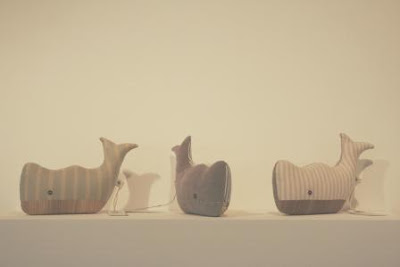 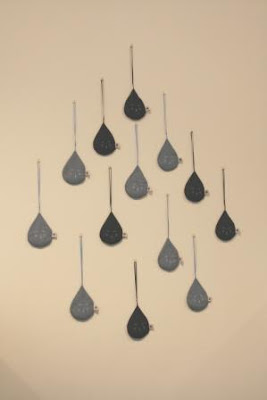 The Umbrella Collective was pleased to be invited to do an exhibition wall at KickArts Contemporary Art Gallery in Cairns, Australia. The exhibition is called Aqua Vitae - The Water of Life. The Umbrella Collective members participating are Kylie Johnson (Paper Boat Press), Liana Kabel (Art, Design, Jewellery), Shannon Garson (Porcelain), Rebecca Ward (Jewellery) and myself.

Aqua Vitae is showing from 5th August until the 30th August 2008.

About Aqua Vitae: Aqua Vitae is Latin for the Water of Life. In the language of medieval alchemists it conveys the sense of a living being of substance as a directly contrast to the rigid immateriality of mind in the abstract. The vital water was the junction of spirit, soul and body and is an apt expression for how makers feel about their process, product and art as they mould, shape and cut their creations into being.

Water is one of most ubiquitous symbols present within the psyche of man - it is a powerful solvent, it brings opposites into unity, it represents the unconscious itself and is the fountain of all life. Here the water symbol unites the work of the five craft artist of the Umbrella Collective.

My 100 Water Houses, Ishmael's Whales and Rain Berries are included in this exhibition. 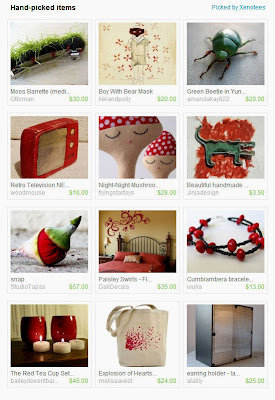 Night-Night Mushrooms has been a bit of an Etsy front page star over the last few days. I haven't seen any of them personally but via the number of views I guessed that it had happen. The very lovely Donna AKA Leafpeople saw one of them and sent me a screen shot. I was very touch by her thinking of me. I just love her new Airedale hanging ornaments and adorable Scottish Terrier brooches, see them on her Etsy shop or on her Flickr page. Thanks Donna! 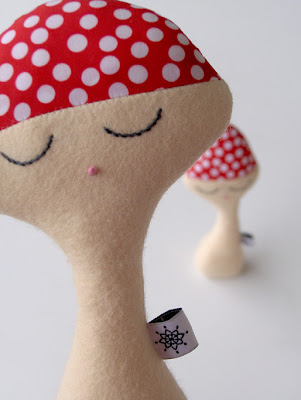 Sleep time wouldn't be the same without a story. Luckily Night-Night Mushrooms know many magical tales for sleepy heads to dream about. 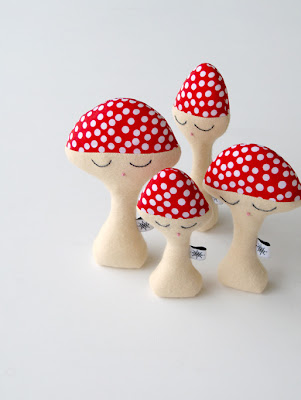 When I think about bed-time stories I can't help thinking of the magic mushrooms with the red and white tops. The image of these mushrooms takes me immediately to the world of fairy tales and legends - what a wonderful place is the imagination! Fairy tales and myth take us on a journey inside the human psyche and these stories can often be of help in later life. As an artist, I can tell you a little imagination goes along way. Night-Night Mushrooms are a tribute to story time and the land of dreams. 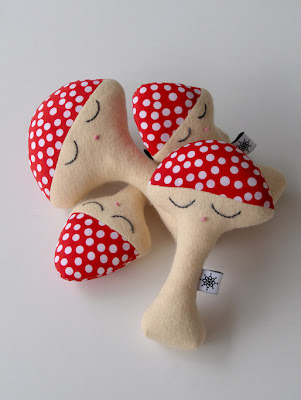 There are 6 different mushrooms (four released at this stage). They are made of wool blend felt and a wonderful, rare random spotted fabric for the top. The face is hand stitched in sashiko cotton thread. Night-Night Mushrooms are weighted to stand independently.

For more images of see the Night-Night Mushrooms gallery page.